RAID on my time and patience...

June 10, 2007
I had a 5 day weekend this week and I had huge plans to upgrade my computer to a RAID array. I wasn't going to start upgrading my computer until my brother got here on Friday so I spent Thursday lounging around, playing PSP and PC. I also had a couple of Superior Studios jobs to attend to. I scored my first Web-based database deal, and secured my latest web design project.

Friday, my brother (Greg) rang early to let me know that he wasn't coming up this weekend. A week of rain had meant that he would miss out on heaps of work, so he wasprobably going to work the weekend to make up for it. There were two reasons I was waiting for him to get here before starting my RAID upgrade, the first was the spare storage space he would bring on some old Hard Drives, and the second was to help him set-up his raptors in a RAID.

I started backing up my computer to hard drives, memorysticks, and anything else I could get my hands on. By 2pm my computer was fully backed up (except for the stuff I was willing to lose). I formatted my drives and created a RAID array (mirror) with the RAID utility, and my two hard drives. The two hard drives I was using were a WD 320 GB and a Seagate 320 GB.

The windows install failed due to write errors while copying files to the hard disks. I tried a reinstall, this time a stripe, the install failed again. I was sure there was something...

Gotta go light the fire, be back to finish this rant off shortly...

Alright, where was I? That's right. I'm sure there was something wrong with the new Seagate Hard Drive I just purchased. It is makes alot more noise than my current Western Digital drive. I ran a CHKDSK on both drives and they both appeared to be healthy. I continued to try different types of arrays until I finally gave up.

I got it in my head that it was the Seagate Hard Drive making things difficult, so I decided I would go to Brisbane tomorrow (Saturday) and get a new WD 320GB Hard Drive.

I got up early and took Selby to work, then went back to bed for an hour before heading off to Brisbane. I planned to pick up my new Hard Drive from The Disc Shop on the Northside and didn't plan to go anywhere else. I had to be back to pick Selby up from work at 12:30. I'm going to cut a long story short here, cause it still makes me sick to talk about it. The Disc Shop didn't have any of the Hard Disks I could use. There was no use going home so I decided to go to Gamedude on the Southside of Brisbane. I got lost trying to find the store (it's impossible to get to) and got back late to pick Selby up.

The worst part about all this is that the new Hard Disk I purchased didn't fix my problem. I decided it was time to research this on the internet. Many people seemed to have the same problem as me. Everyone seems to agree that Western Digital and NVRAID (NVidia RAID) are a bad combination, especially with the model of WD Disk my original one is.

3 Days later. I have the RAID working as a Stripe with my new Western Digital Disk, and my new Seagate Disk. I have to have the disks plugged into SATA ports 1, 3 and 5 and I will be using my 3rd (original) WD Hard Drive as a back-up incase the RAID fails, as we all know Stripe doesn't keep your data safe in the event of a drive failure.

My computer's read and write speeds have doubled from 55MB/s to 111Mb/s with my new RAID Array, but I will never use NV and WD in a RAID ever again. I have some photos of my system, progress shots etc etc to follow.

My new computer (i.e with RAID) will be called REAVERMkII. It was originally called Reaver after the totally mad StarCraft unit by the same name. 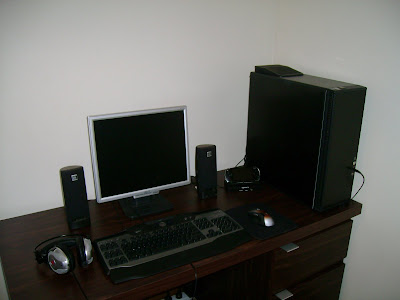 My Gaming Rig on my new table (Above) 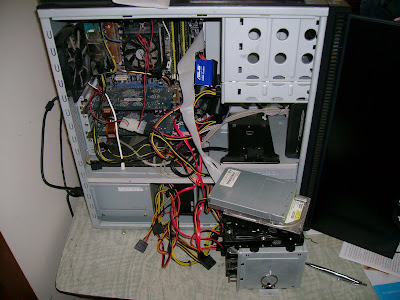 A RAID work in progress (Above) 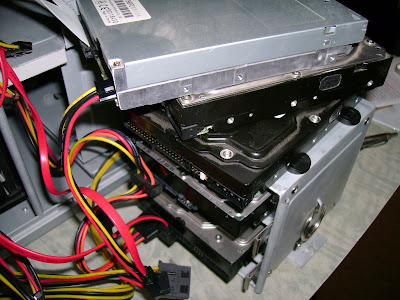 A stack of Hard Drives (Above)
Because I had plenty of spare time this weekend, sitting around infront of my computer I ended up playing alot of Killzone: Liberation on PSP. I still love that game. I've completed the single player campaign on easy, and I am working through on medium. I've also got a bronze medal in all of the unlocked challenges.
Gamedude NVidia NVRAID RAID0 RAID1 Reaver Seagate The Disc Shop Western Digital